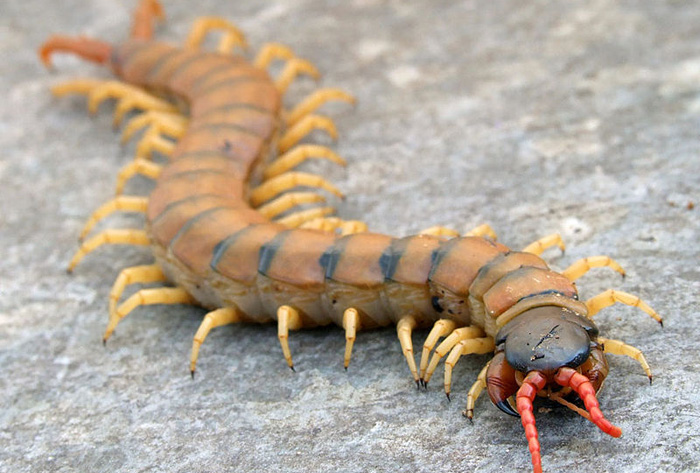 Centipedes come equipped with modified front legs, which are loaded with a deadly venom that they can use to hunt and kill small creatures, most common centipedes (like the ones you might find in your garden) use this venom to hunt small insects and arachnids. However, there is a type of centipede in South America called Scolopendra gigantea or as it is more commonly known; the Amazonian Giant Centipede, which is the largest of all centipedes, known to grow to up to 35cm long (the length of a man’s arm!). These terrifying creatures are known to thrive in dark caves and feast on lizards, frogs, mice, snakes and even birds and bats.

The Giant Centipede thrives in the darkness, it has been known to clamber up dark, damp caves, clinging to the walls where it hangs in waiting, upside down, for an unsuspecting bat to fly into its deadly embrace. It injects its poison which, once administered through its pincer-like front legs, causes death after mere seconds of quiet thrashing in the pitch black of the cave.

This poison causes near-instantaneous death in most small creatures, however it would not be fatal to a human, though accounts show that it is as painful as being stung by 20 bees at once and the pain lasts several days. The bite of a centipede has been known to cause various side effects including nausea/vomiting, palpitations and racing pulse, anxiety and the swelling of lymph nodes following a bite.

Bonus Fact: While the name “Centipede” literally means “100 footed” they do not actually have 100 legs. The number of legs varies per species, they have between 15 and 177 pairs of legs depending on how many body segments they have.

Video of Giant Centipede hunting bats (not for the squeamish)