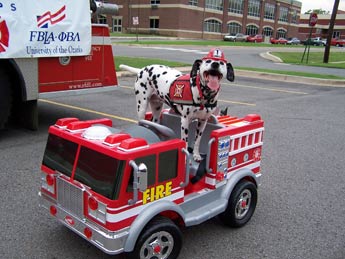 The spotty dogs also had many other roles within the fire department, they acted as the first fire sirens, once the alarm would go off in the fire station the Dalmatians (who often worked in pairs) would run out of the fire station and start barking in the street to let everyone know to clear the way for the fire truck.

Dalmatians can also run very fast and for very long periods of time so they would be able to easily keep up with the horses while running to the fires for hundreds of miles and continue barking to make sure the road would be clear for the fire engines. They would also act as guard dogs for the firemen, they would guard the firemen’s belongings so nothing would get pinched while they were fighting the fires or back at the station. They could also be trained to catch and kill rats and other vermin in the fire station.

With the advancements in modern technology, our fire engines today have motorised engines and built-in sirens to warn people of their coming, so you might think there is no place for Dalmatians in the fire station any more. However, many fire brigades have kept the tradition alive and still keep Dalmatians on as their official mascots, they are used particularly when teaching children about fire safety.

Ants Can Fall from Any Height Without Dying